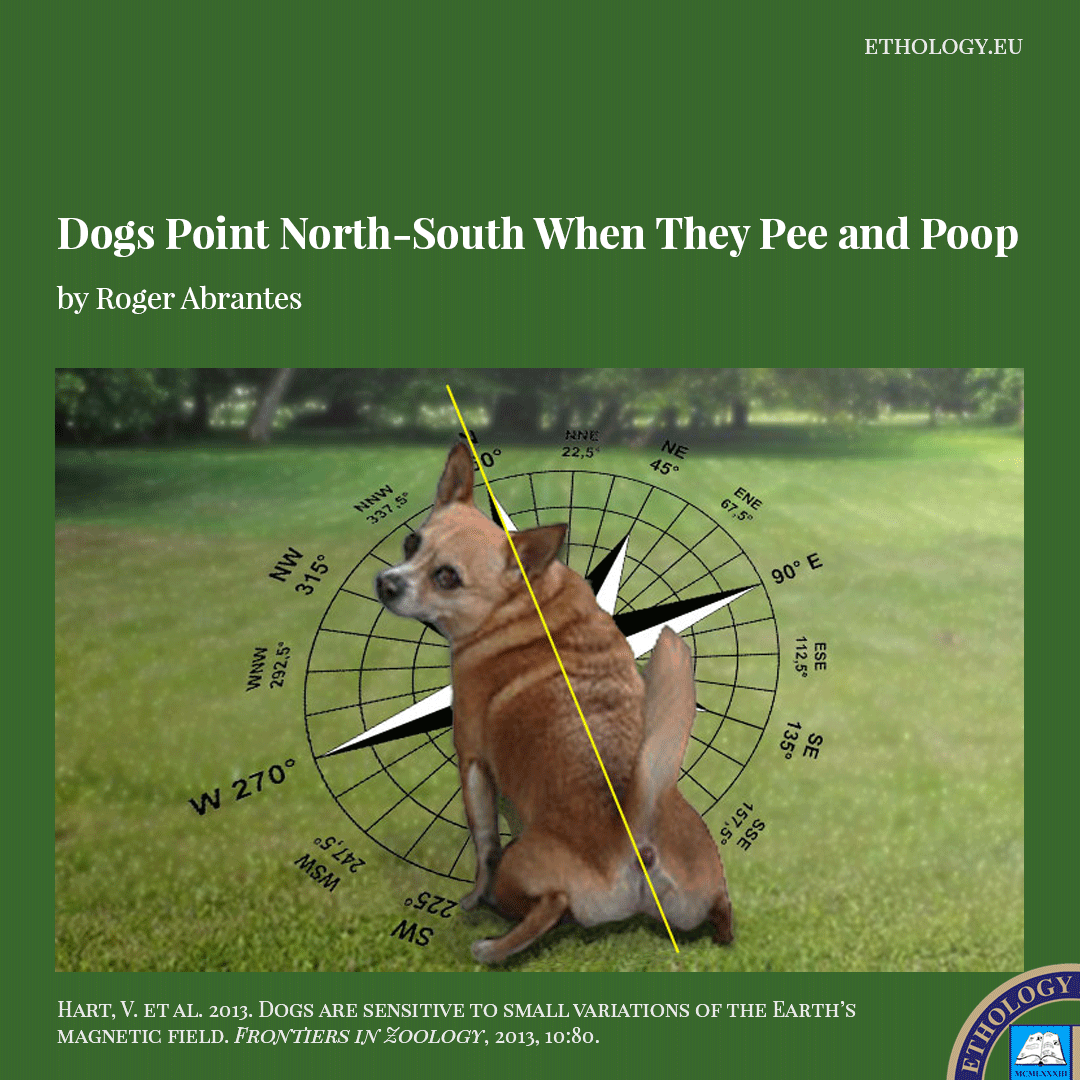 Dogs point North-South when they pee and poop. They use the Earth’s magnetic field when urinating and defecating, aligning their bodies in the N-S axis.

Under calm magnetic field conditions, dogs preferred to defecate with their bodies aligned along the north-south axis, even when sometimes facing south. Dogs not only favored N-S but also avoid E-W.

The data shows that larger and faster changes in magnetic conditions result in a random distribution of body alignments, i.e., a lowering of the preferences and ceasing of the avoidances, which may result from the magnetic disturbance or the intentional shutdown of the magnetoreception mechanism.

To avert any bias, all dogs moved in a free-roaming environment, off-lead and not restricted by walls or roads that would influence their movements. The routes of walks changed to exclude or limit pseudo-replication caused by the dogs defecating and urinating in the same few places.

The researchers also excluded the sun, polarized light, and the wind as determining factors for the body alignment of the dogs.

No Differences Between Males and Females

No Answer to Why Dogs Prefer the North-South Axis

We have no answer to why dogs prefer the north-south axis and avoid east-west. It may be intentional, in which case they must perceive the magnetic field with one of their senses (as a haptic stimulus), or maybe they feel more comfortable aligning them in a particular direction (controlled at the vegetative level).

Earlier studies confirmed that the natural fluctuations of the Earth’s magnetic field may disturb orientation in birds, bees, whales, and even affect vegetative functions and behavior in humans.

Studies on the wolves’ (Canis lupus lupus) homing are inconclusive. We cannot rule out the possible influence of an inherent sense of direction. There may be critical periods during a wolf’s life during which specific elements of its environment may imprint on it. In a study, the simplest hypothesis that explained the movement of four wolves was responses to visual, olfactory, and auditory cues with the latter probably being the most important. The wolves seemed driven to return to familiar territory, using the strongest learned exogenous cues (Henshaw and Stephenson 1974). Magnetoreception could have been a homing aid.

The findings of Hart et al. open new perspectives on how organisms use magnetic fields for direction.