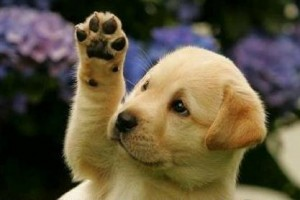 In our case, and fortunately, we discovered it early enough so we could correct it relatively easily. Skinner found that his pigeons would repeat superstitious behavior 10,000 times even in the absence of reinforcing, but their behavior had been accidentally reinforced many mores times than the behavior of our Guinea pigs.

The trainers, aware of the undesired behavior they had created in their piggies concentrated their efforts yesterday on extinguishing it. Fully focused on applying the reinforcers to the desired behavior at the right timing, they trained some sessions and by the end of the morning, it seemed both piggies had gotten it right. It was not an easy task because it required excellent observation skills and an exquisite sense of timing. Remember that we wanted to extinguish the superstitious behavior, not the correct “paw on tin” behavior that we had chosen as our preferred indication behavior for the location of the target scent.

We had a most satisfactory Guinea pig camp training day yesterday. Problems will always and inevitably arise and there is nothing we can do about it. Preparation is necessary and reduces the odds of running into problems considerably, but there are too many variables. We cannot reasonably expect never to encounter issues. Therefore, the key to success is to keep cool, analyze the issues, devise a plan of action to correct them, apply the plan and monitor its results. Sometimes, not seldom, we need to adjust our repairing plans a few times before we get the result we want. It’s all part of the process of training, and we’d better enjoy it. Getting upset does not lead us anywhere. On the contrary, in will only complicate further the resolution of the problems.

Since superstitious behavior is highly resistant to extinction, as Skinner demonstrated, and I explained yesterday, we should keep a sharp eye on the behavior of our animals. Remember that in most cases, it is us who create the erroneous associations between stimulus and consequence by accidentally reinforcing the wrong behavior. Reinforcers are powerful learning tools. With them, we can create (almost) all sorts of desired as well as undesired behavior.

ลูกปุย (Lūk puy) performed very well once we had extinguished his superstitious behavior. In the afternoon, he and his team passed the double-blind test in scent detection. I leave you here with the little movie of that moment. We will edit the footage we have and will publish later a movie of the work of the other (equally successful) teams. This was indeed a memorable Guinea pig camp and we were very fortunate to have had the opportunity to learn so many good lessons.

Thanks to all the teams and to Michael and Natalie McManus for hosting the camp. Life is great!

Featured image: Pawing is a common canine pacifying behavior. If we are sometimes a bit too late with our reinforcers and reinforce pawing instead of the behavior the dog just gave us, the dog may create an association between pawing and the reinforcer (and not the behavior we wanted). This is what we call superstitious behavior in animal learning (photo from WJLT).