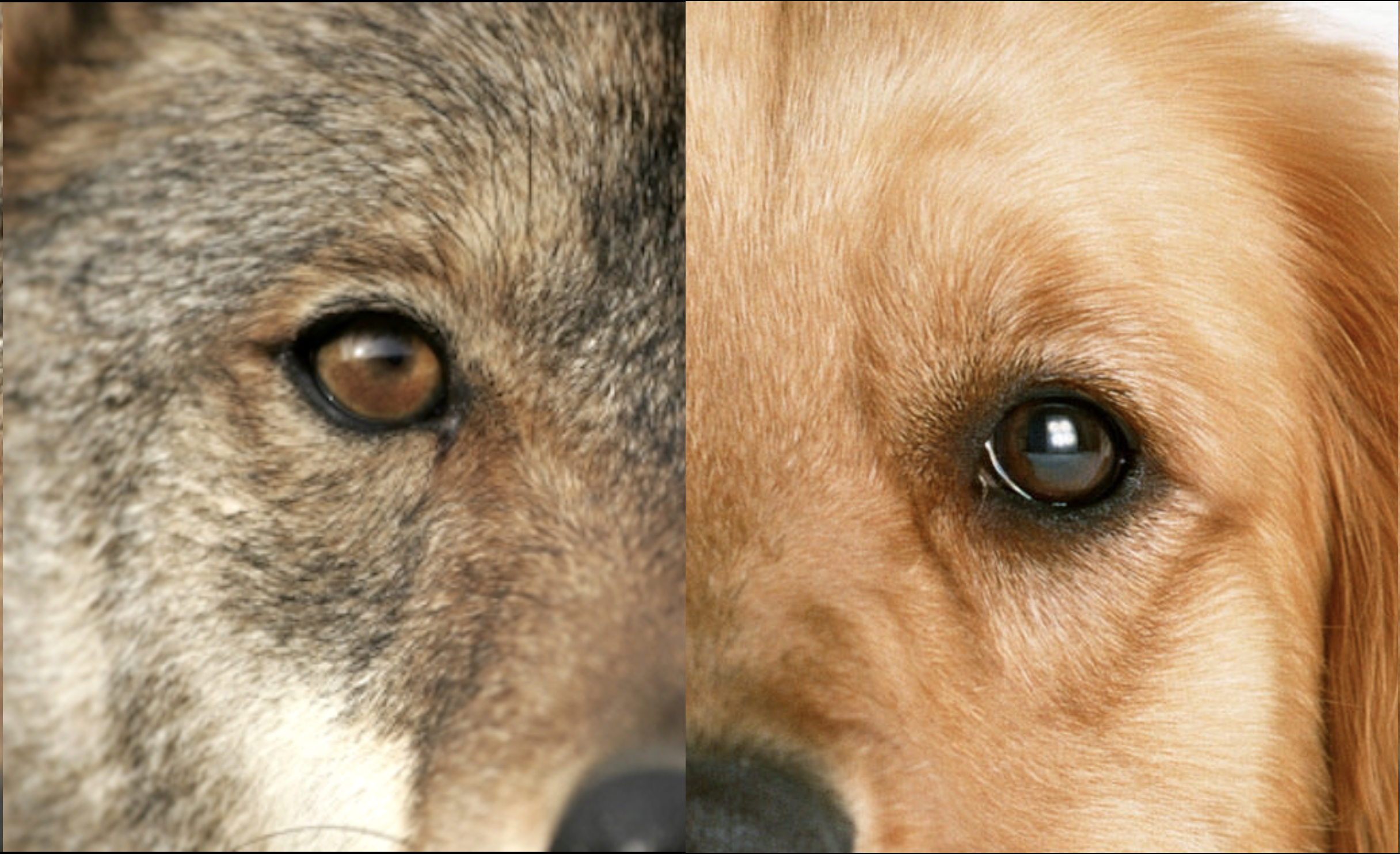 The question has popped up several times in discussions on social media, with one faction adamant that wolves and dogs have nothing or very little to do with one another. As a result, we should not make comparisons between them.

As to how similar and different wolves and dogs are, I gave a lecture, “Wolf and Dog— A Comparative Study,” for the first time at the UNAM, Cuautitlán, Mexico, on May 2, 2017, covering the topic from (of course) a strictly scientific point of view. Having been studying wolves, dogs, and related canids for almost all of my professional career, I’ve collected plenty of evidence to pass judgment on the question.

It’s essential for us, as true behavioral sciences students, to stick to facts and sound argumentation. Therefore, I will give you here some points to help you evaluate the debate about wolves and dogs that we’ve seen on the internet, one dominated by hidden political agendas, emotional outbursts, and old wives’ tales. These facts will help you conduct a debate based on the currently available evidence and form an informed opinion on the topic.

Let me remind you that the term ‘compare’ in science refers to the discovery of similarities and differences. Both are equally fascinating and may supply us with valuable knowledge.

The following is only a short sample of the many more comparative facts we have. Please see the reference list.

● The dog family, Canidae, diverged from other carnivore families 50 to 60 million years ago. The family, comprising 34 extant species, shows a wide range of chromosome morphologies. The diploid chromosome number varies from 2n=36 (mainly metacentric autosomes) in the red fox, Vulpes vulpes, to 2n:78 (with all autosomes being acrocentric) in the domestic dog and various wolf-like canids such as the gray wolf, Canis lupus lupus. The chromosomal rearrangements in the different species help us deduce the group’s phylogenetic history (Wayne et al. 1987).

● Mitochondrial DNA sequences also reveal the Canidae’s evolution and the origins of the domestic dog (Wayne 1993). The results show that the domestic dog, Canis lupus familiaris is an extremely close relative to the gray wolf, with as little as 0.2% variation in mitochondrial DNA sequence between the two. That contrasts with the 4% variation in mitochondrial sequences between gray wolves and their nearest wild relative, the coyote, Canis latrans.

● Whole genome sequencing indicates that the dog (Canis lupus familiaris), the gray wolf (Canis lupus lupus), and the extinct Taymyr wolf diverged at around the same time 27,000–40,000 years ago (Callaway, 2015).

● Canis lupus familiaris: 88% of its behavior is equal to the behavior of the Canis lupus lupus or slightly modified (Zimen, 1992; Feddersen-Petersen, 2004).

● Based on recordings of the social behavior of approximately 200 canines, including ritualized and non-ritualized forms of agonistic behaviors, play, and other affiliative behaviors, Feddersen-Petersen (2007) suggested that—contrasting to wolves—dogs have difficulties in cooperating even in a simple manner of just doing things together.

● In general, the ranking order (hierarchy) is a lot steeper in dogs than in wolves, resulting in a considerable social distance between the high-ranking animal(s) and the rest of the group (Feddersen-Petersen 1991).

In dogs, agonistic interactions often reach high aggression levels because dogs lack most strategies that wolves commonly use to solve conflicts, such as pacifying and inhibiting their opponents (Feddersen-Petersen 1991).

● Results of studies suggest that the structure of the dog packs was relatively similar to that of wolf family packs, in which the ranking order is based on age, and males tend to dominate females within a given age class (van Hoof & Wensing, 1987; Mech, 1999; Packard, 2003).

● Leadership was shared among group members in the studied dog packs, although not equally (Bonanni et al., 2010). Although every dog of at least one year of age could sometimes behave as a leader, each pack contained a limited number of ‘habitual leaders’ (i.e., individuals who behaved more frequently as leaders than they behaved as followers).

● Old and high-ranking individuals mainly provide leadership in the studied population’s free-ranging dogs (note that age and rank are positively correlated). This pattern seems to be relatively similar to that found in wolf family packs, in which parents lead activities (Mech, 2000; Peterson et al., 2002).

● In dogs, but not wolves, high-ranking animals show more aggression than lower-ranking ones about monopolizing the food (Ritter et al., 2012).

● Conclusion: Wolf and dog are quite similar in anatomy and physiology as to behavior, in some aspects more than others. See also the video “A Dog Is Not a Wolf—Is It?” 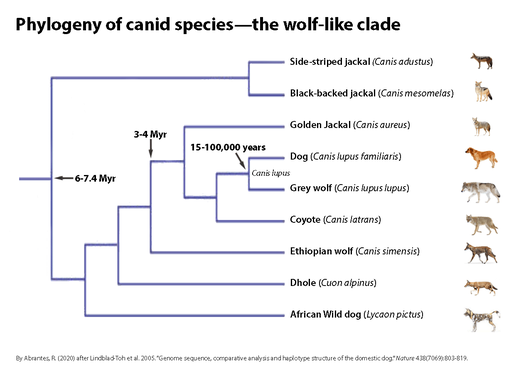 Phylogeny of canid species: the wolf-like clade. The phylogenetic tree is based on 15 kb of exon and intron sequence. The tree shown was constructed using maximum parsimony as the optimality criterion and is the single most parsimonious tree. Species names are represented with corresponding illustrations. Divergence time, in millions of years (Myr), is indicated for three nodes (Figure from Nicole Stange-Thomann, adapted by Roger Abrantes).

Note: For comparison, humans (Homo sapiens) and chimpanzees (Pan troglodytes) last shared a common ancestor ∼5-7 million years ago (Mya). The two species differ in DNA by ~4%. (Chen and Li 2001; Brunet et al. 2002; Varki, A., & Altheide, T. K. 2005). The complete mitochondrial DNA (mtDNA) molecules of Homo and the common chimpanzee were sequenced. The nucleotide difference between the entire human and chimpanzee sequences is 8.9%. The difference between the control regions of the two sequences is 13.9% and 8.5% between the remaining portions of the sequences (Arnason et al. 1996).

Chen, F.C. and Li, W.H. (2001). Genomic divergences between humans and other hominoids and the effective population size of the common ancestor of humans and chimpanzees. Am. J. Hum. Genet. 68: 444-456.