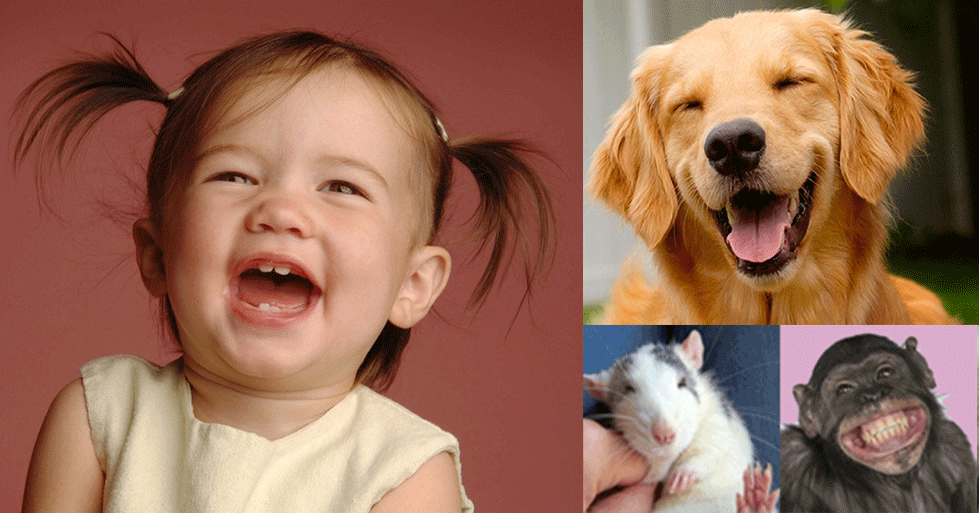 As you have figured out by now, I enjoy finding proof that humans are not that different from other forms of life. We share many characteristics with the other living creatures on our blue planet. Today, I have one more example for you—laughter.

Laughing is an involuntary reaction in humans consisting of rhythmical contractions of the diaphragm and other parts of the respiratory system. External stimuli, like being tickled, mostly elicit it. We associate it primarily with joy, happiness, and relief, but fear, nervousness, and embarrassment may also cause it. Laughter depends on early learning and cultural factors.

The study of humor and laughter is called gelotology (from the Greek gelos, γέλιο, meaning laughter).

Chimpanzees, gorillas, bonobos, and orangutans display laughter-like behavior when wrestling, playing, or tickling. Their laughter consists of alternating inhalations and exhalations that sound to us like breathing and panting. A study comparing the acoustics of tickle-induced vocalizations from infant and juvenile orangutans, gorillas, chimpanzees, bonobos, and human infants revealed the similarities and differences among the five species. We have strong evidence that tickling-induced laughter is similar in great apes and humans and support the phylogenetic continuity from nonhuman displays to human emotional expressions. (1)

Rats display long, high frequency, ultrasonic vocalizations during play and when tickled. We can only hear these chirping sounds with proper equipment. They are also ticklish, as are we. Particular areas of their body are more sensitive than others. There is an association between laughter and pleasant feelings. Social bonding occurs with the human tickler, and the rats can even become conditioned to seek the tickling. (2)

Dolphins make sounds consisting of short bursts of pulses, followed by a whistle. They only make these noises during play-fighting and never during aggressive confrontations. We presume that these sounds function to emphasize playfulness and prevent episodes from escalating into actual agonistic displays—the equivalent of laughter. (3)

A dog’s laughter sounds similar to a regular pant. A sonograph analysis of this panting behavior shows that the variation of the bursts of frequencies is comparable with the laughing sound. When we play this recorded dog-laughter to dogs in a shelter, it can promote play, social behavior and decrease stress levels. (4)

Featured image: We laugh, but we are not the only ones.